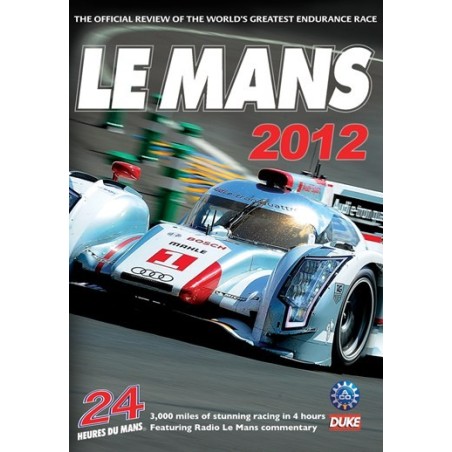 The 2012 Le Mans 24 Hours produced a fascinating, action-packed and gripping race, the perfect ingredients for the 80th running of motorsport’s greatest event. The official review brings you all the vital highlights and unforgettable moments of more than 3,000 miles of racing in 4 hours of stunning footage.

Skilfully edited from more than 24 hours of High Definition coverage, the review tells the full story of each class, with trackside, aerial and in-car cameras – as well as the circuit’s CCTV – ensuring you don’t miss any of the pivotal events. The commentary features a seamless mix of the live TV and Radio Le Mans coverage, plus driver and team interviews and, for the first time, the chance to listen in on race director Eduardo Freitas as he talks to the racers.

The opening hours delivered an epic duel between Audi’s R18 e-Tron Quattro and the new TS030 Hybrid from Toyota in the LMP1 class, but even after Toyota’s determined effort was ended, the four-way Audi tussle ensured an edge-of-the-seat contest as the hours ticked down. With the end in sight, 10 minutes of madness saw the Audi challenge thrown into chaos, but the team’s ever-cool approach ensured they could not be denied a 10th Le Mans win, and the first victory for a hybrid car.

The review also follows the fortunes of the LMP2 class, including returning former sportscar World Champion Martin Brundle, and the drama of the Professional and Amateur GTE classes. Plus, of course, there is the debut of the eye-catching Delta Wing Nissan.

Through day and night, crashes, spins, mechanical problems and even loose wheels bring new twists to the race, not least the shocking crash which left Brit Anthony Davison with serious back injuries and the actions of Romain Dumas, whose brutal treatment of his stricken R18 Ultra showed just how determined the heroes of Le Sarthe are.

The 2012 Le Mans 24 Hours was action and drama all the way, and now you can experience it all in the most thrilling highlights.

Our review of the 2011 Le Mans was well received by critics and fans, as the in-house editing and Radio Le Mans commentary made it one of the best 24 Hours highlights packages of recent years. The Observer said “sportscar fans will revel in the Le Mans 2011 review”, Track Driver called it “the Duke Speciality”, while fan Chris Howles said “this is exactly what we all wanted. Just pure racing…brilliant, a much better review than recent years”.